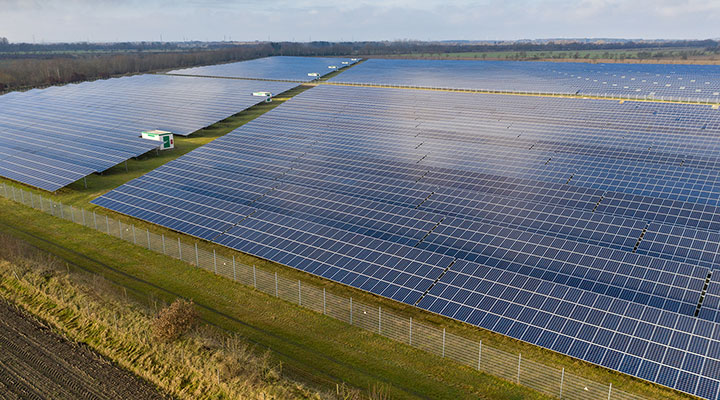 Located around 1.5 hours north of Hamburg, the solar park covers an area of approx. 27 hectares and will generate enough green energy to power around 6000 homes. Klein Rheide is an excellent location for a solar energy park thanks to high solar insolation and constant winds from the North and Baltic seas to cool the panels, as well as its close proximity to potential energy customers.

Andreas Hoischen, Senior Director at Delta Electronics, is pleased that the M88H made a winning impression:  “String inverters from Delta Electronics are designed to perform well as part of advanced solar system designs. Thanks to their robust construction and active cooling, they deliver maximum yields to the grid year in, year out.”

A Positive Outcome — For Nature Too

After the gravel pits in Klein Rheide had been depleted, the landowner was searching for a constructive way to reuse his land. He eventually decided to lease the unused land to allow a solar park to be built. In this way, the owner can generate new revenue while also investing in the energy transition by producing clean solar energy. The owner was also particularly interested in ecological land management practices to increase plant and animal diversity and create precious habitats for insects and birds.
Therefore the special aspect of the PV park is not only the sustainable use of a former gravel mining site, but also its ecological design.

Even at the planning stage, an extensive catalog of measures was prepared to integrate the agricultural use of the land with enhanced ecological conditions in an approach known as sustainable land management (SLM). One example of such measures is sowing 500 kg of wild flower seeds each year to provide a source of food for wild bees and other native insect species. Natural wetlands also provide a safe habitat for amphibians, while secure corridors allows wildlife to move safely through the solar park at various points. Successfully inhabited bird houses as well as shelters for bees and bats provide safe habitats.
Furthermore, special conservation management promotes insect and bird diversity in the area. Wattmanufactur decided for a pasture management with sheep to graze the land to ensure sustainable use of the grassland. A study by the German Association of Energy Market Innovators (BNE) named "Gains for biodiversity in photovoltaic solar parks" (only available in German) has proved that this ecological symbiosis is successful.

"I am very pleased to see how successful the realization of the solar park is for local inhabitants and nature. We've had bees and even a few bats move in to the artificial tree trunks", said the landowner.

Wattmanufactur GmbH & Co. KG plans, builds and operates photovoltaic open spaces throughout Germany exclusively for its own use and is the only point of contact during the entire planning and construction process. Out of conviction, concepts are developed in all phases of a project together with owners, communities and regional environmental authorities in order to combine energy production, extensive agriculture and nature compatibility and thus make a significant contribution to nature and landscape conservation. The company was founded in 2010 and is based in Galmsbüll, North Frisia, Germany. It currently employs around 30 people. The team at Wattmanufactur has so far planned and built solar parks throughout Germany with a total capacity of approximately 175 MWp. Over 200 MWp is overseen by its in-house technical management team.

Delta, founded in 1971, is a global provider in power electronics and thermal management products with a thriving portfolio of smart energy-saving systems and solutions in the field of renewable energy.

Since 1999, the subsidiary Delta Electronics (Netherlands) BV has invested in the development and marketing of the Solar Inverter Program, which has made an important and successful contribution to Delta’s focus on offering our customers environmentally-friendly power generation for residential up to large-scale commercial applications.