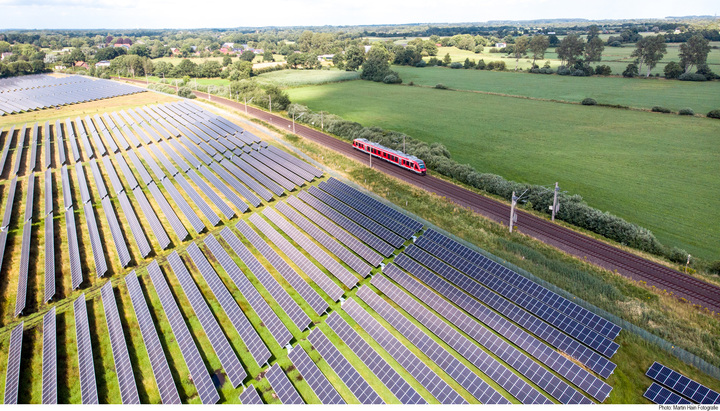 The 10 MWp solar park in the district of Schleswig-Flensburg/Schleswig-Holstein is currently the largest ground-mounted photovoltaic system in Germany with a single-axis tracker system that follows the sun from east to west. Compared to conventional static installations, this innovative solar park generates significantly more energy in the morning and evening hours with the help of 23,184 bifacial solar modules, thus exhibiting more consistent power production throughout the day. The Lottorf Solar Park also complies with the latest grid connection guidelines and can make an important contribution to grid stability by providing reactive power during the day and at night.

After 4 months of construction, the EEG (Renewable Energy Sources Act)-eligible photovoltaic open space was connected to the grid of Schleswig-Holstein Netz AG. In the coming year, the total output of the ecologically designed solar park will be expanded by another 7 megawatts of rated output, bringing the total to 17 MWp. The Lottorf Solar Park will then generate around 20 million kilowatt hours annually and supply around 5,700 households with renewable energy.

Andreas Hoischen, Senior Director at Delta Electronics, explains: "Delta Electronics is pleased that our inverters were selected for this special project. The single-axis tracker system makes it possible to feed in significantly more solar power in the morning and evening compared to fixed setups. This means a much higher utilization of our M88H inverter, which is particularly well suited for such demanding tasks thanks to its robust design."

By combining technical innovation with knowledge of sustainable land use, Wattmanufactur GmbH & Co. KG has developed an ecological land management concept that is specifically tailored to the site of the former raised bog. The use of rotating modules maximizes the shading possibility of the soil, but at the same time continues to offer a full-surface irrigation possibility. This allows the previously intensively managed peatland soil to recover and return to its most valuable role - CO2 sequestration - in the future. Extensive grassland management is also part of the ecological land management of the solar park. Rows of flowers and careful mowing using Brielmaier's double-blade technology promote the emergence of insects and birds, as the insects do not get into the mower during mowing. In addition, the solar park includes large areas with undermined bird protection zones for ground-nesting birds such as skylarks and lapwings, which are protected there from predators.

All effects on soil, flora and fauna are documented and evaluated in a long-term monitoring together with expert biologists. The area is also farmed ecologically in accordance with the EC Organic Farming Regulation 834/2007 and is certified annually by an independent inspection body. The Lottorf Solar Park thus demonstrates that renewable energy generation, agricultural use and the creation of a near-natural habitat can co-exist in harmony.

Wattmanufactur GmbH & Co. KG focuses on the construction of site-appropriate, ecological solar parks with added value. Based on strong conviction, concepts are developed in all phases with owners, municipalities and regional environmental authorities in order to combine renewable energy production, extensive agriculture and nature compatibility and to make a significant contribution to the protection of nature and landscape. The company, founded in 2010, is headquartered in Galmsbüll, North Frisia, and currently employs around 35 people. Currently, the team of Wattmanufactur GmbH & Co. KG builds photovoltaic systems with a total output of 60 - 100 MWp per year. The PV plants are then serviced by the in-house technical management.

Delta, founded in 1971, is an international power electronics manufacturer with a growing portfolio of smart energy saving systems and renewable energy solutions.

Since 1999, Delta Electronics (Netherlands) B.V. has invested in the development and marketing of high-quality solar inverters up to 250 kW, making an important and successful contribution to high-performance, reliable and environmentally friendly power generation.