Delta string inverters were installed in a 2.2 MWAC solar plant at a shopping center in Nordhorn, Germany.

In the early spring of 2016, the owner of the Nordhorn shopping center faced a problem that many other owners with older commercial buildings encounter. The commercial site, which houses a major supermarket and many smaller shops, was plagued with a leaky and asbestos-laden roof. The enormous surface area of the rooftop meant that the renovation work would be very costly. To offset this huge outlay, the owner came upon the obvious idea to combine renovation of the roof structure with the installation of a solar PV system. The solar energy generated by the rooftop PV plant could be sold back to the grid and the FiT revenue would help to pay off this large investment.

An important requirement of the supermarket tenant was that their business operations were not hindered by the roof renovation measures. To connect a new solar system to the existing grid connection point at the site, would mean the exchange of old electrical equipment and a minimum of two weeks emergency power supply would be needed for this to happen. Constructing a completely new grid connection for the new photovoltaic rooftop system was determined to be the best way to avoid interruption of business.
Project Realisation
Two firms were selected to complete the project. PRE Energy GmbH, with 25 years in renewable energy, was selected to plan the complete solar system up to the grid connection point. Wopereis Group, with expertise in steel rooftop systems, was selected for the planning and construction of the roof and solar system.

In March 2016, the project construction began. The original gable roof was replaced with similarly designed steel structure which could be erected quickly. The building rooftop consists of 7 saddle roofs positioned in rows that are orientated to the northwest and southeast, respectively, and the tilt angle set at 11 degrees.
Due to the different orientation of the two halves of the gable roof, the optimum solar irradiation for energy harvest is reached at different times of day.

It was therefore, ideal to use solar inverters with 2 maximum power point trackers (MPPT’s), whereby each MPPT could work independently at different times of day to provide optimized power from each roof surface. When compared to a flat rooftop, the saddle roof has the added advantage that additional solar modules could be incorporated in the design due to the larger surface area of the gable roofs. The RPI M50A and M30A solar inverters from Delta were selected for the project by PRE Energy because they offered the two MPP tracker feature and also because PRE Energy had used the Delta units for several years before so had a good experience with them. 34 RPI M50As and 6 RPI M30As were installed in the system. 8,461 Talesun solar modules with 260 watts each were also incorporated in the system.

Thanks to the compact design of the M50A and M30A string inverters, the installation takes up a relatively small space compared to large central inverters. The comparably low weight of 74 kilos for the M50A makes it easy to mount on the wall. Because the inverters are wall-mounted, they do not take up valuable space and can be easily accessed at all times. The inverters’ high level of efficiency of up to 98.6 percent is important for maximum energy yield, where each tenth of a percentage point counts in the inverter market. The robust aluminum chassis with protection degree IP65 protects internal electronics from moisture due to rain or snow. Replaceable AC and DC-side type II surge arresters have already been integrated into the inverters, which saves up to 40% on systems accessories.

The planning and simulation modelling of the rooftop PV system by Delta partner, PRE Energy, was essential to create the optimum PV solution for the shopping center owner. PRE Energy was able to determine with a few usage scenarios, that a saddle roof with the installation of the Delta inverters featuring 2 MPPTs would yield a better output than utilizing inverters on a flat roof design. Also, it was determined that self-consumption of the solar energy was not the best use of the PV plant energy in this situation due to the low electricity prices already negotiated by the major supermarket tenant.

However, feeding the solar generated power into the grid in exchange for EEG (Renewable Energy Sources Act) compensation had more potential than internal energy consumption. It was important that the solar plant was put into operation in 2016 to gain a feed-in tariff advantage. In 2017, the EEG amendment prescribed that installations with over 750 kilowatts of power must participate in tenders from the Federal Grid Agency in order to receive any EEG feed-in compensation.

On December 29, 2016, the rooftop system with 2.2 MWAC power was connected up to the grid. The remuneration via a feed-in tariff ensures the rooftop investment will be paid off in the future. The environmental benefits are also clear, this PV plant will provide clean energy to the grid for years to come with a reduction in carbon emissions. Delta’s cooperation with PRE Energy was very good, and the firm is proud of its contribution to help halt climate change and contribute to worldwide energy savings with its highly efficient solar inverters. 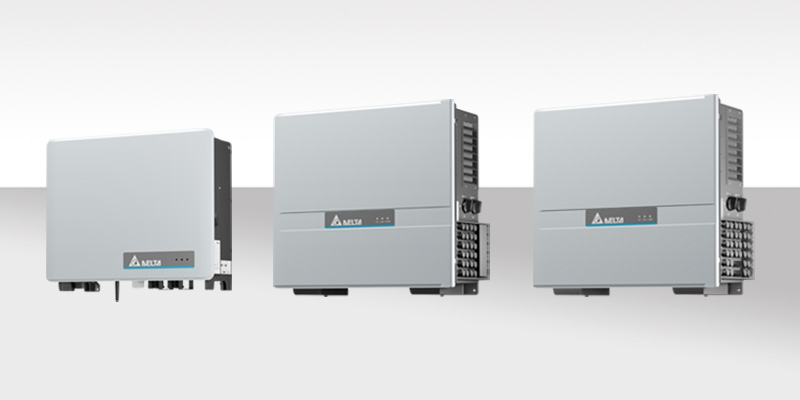